Once you have decided to do a voluntary disclosure, timing of the submission is an important consideration. 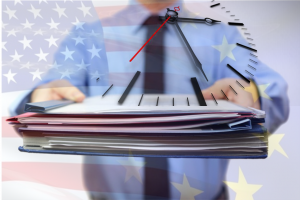 Under US export controls and trade sanctions regulations, the disclosure will count as a “voluntary disclosure” only to the extent that it is submitted to the relevant agency before the US government discovers the violation itself or has begun an investigation of the same or substantially similar matter.  Hence, it is important to consider not just whether to disclose, but when to do so.

Waiting until the entire investigation is complete may not be timely enough.  Some investigations can take many months and the risk of the government agency starting its own investigation may increase during that time.  Not to mention that if the matter at issue is particularly serious, notifying the relevant authorities sooner rather than later could enable them to mitigate some of the harm.

You likely do not want to disclose before you have a fairly high level of certainty that a violation did actually happen.  Let’s face it—it is hard to “unring” the bell if you file a voluntary disclosure about a matter thinking that a violation had occurred, only to discover as your investigation proceeds that there was, in fact, proper authorization for the activities at issue or the facts about what had actually happened were mistaken.  If you have already filed a voluntary disclosure, you would then find yourself having to convince the enforcement agency that the disclosure was just an exercise of caution and the company’s efforts to be a good corporate citizen, but, alas, there was no violation after all.  Sometimes that is not such an easy sell, particularly if the facts are complicated.

As mentioned in Part 1 of these series most EU Member States (including Belgium, Netherlands and Luxembourg) do not provide any procedural requirements or guidance with respect to voluntary disclosures. Nevertheless the principle remains that a voluntary disclosure (and its mitigating effect) is no longer ‘voluntary’ once the competent regulator and/or enforcement agency has initiated an investigation. It is therefore indeed best to file the preliminary disclosure only at the moment that an  investigation shows that it is likely that a violation has occurred. In practice a (potential) violation is often discovered at the time of a due diligence investigation in the framework of an M&A or financing transaction. Under those circumstances the company has no choice to disclose as soon as possible or abandon the transaction.

Once the preliminary disclosure has been filed one could generally agree on the timing to submit the full disclosure and even then extensions are generally accepted. If the disclosure includes multiple jurisdictions, it is advisable to foresee sufficient time to prepare a coherent disclosure and to align submission dates. You only get one chance to make a good impression….

In the event that you decide not to voluntarily disclose, be sure to document your internal

La Commission européenne mène actuellement une consultation publique dans le cadre de
The European Commission is conducting a public consultation as part of the
The combination of innovation and digitization causes severe disruption to existing controls
Deciding to whom to submit a voluntary disclosure is also important. US
In the event that you decide not to voluntarily disclose, be sure
Go to Top

In the event that you decide not to voluntarily disclose,